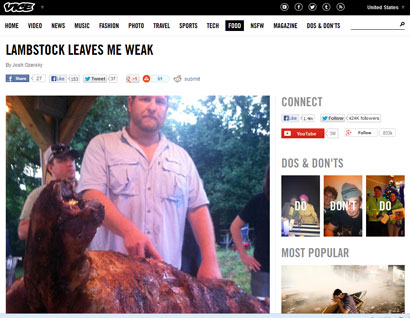 Lambstock is a large, semilegendary, lamb-centric event held annually somewhere in Virginia. I say “somewhere” because, even after attending last weekend, I’m still not sure where it is, exactly. It’s held at Craig Rogers’ Border Springs Farm, which is near the North Carolina border, and near the Virginia border, and near the Blue Ridge Mountains, and that’s about as specific as I can get. Even Rogers himself seems to be unsure; his directions to the place are deliberately vague, and Google Earth shows only a featureless expanse where it is supposed to be. It looks something like the Tibetan Plateau, which, incidentally, would be an ideal place to hold Lambstock. I’ve heard the event called the Burning Man of lamb cookery, and I think that’s about right.

For Email Marketing you can trust